Producing top-quality and hardy Cheviot Mule lambs with length, depth and tight skins is proving a winning formula for husband and wife duo Alan and Sarah-Jane Forbes from Dalrachie, Ballindalloch. Over the last few years, the Cheviot Mule has grown in popularity with sheep producers across the country, earning a premium in the sale ring for breeders who sell ewe lambs throughout the autumn. For Alan and Sarah-Jane, it’s the annual sale of breeding ewe lambs at United Auctions’ Huntly Mart which has helped put their name on the map, selling tremendous Cheviot Mule ewe lambs to a top of £136 per head. The duo first introduced the North Country Cheviot breed to the farm in 2015 after purchasing 50 cast hill ewes from the Achentoul and Croick flocks. Dalrachie is primarily a 350-acre upland beef farm, producing quality Charolais cross store cattle bred from the family’s 120-strong Simmental cross suckler herd. An additional 160 acres is rented near Aberlour, allowing Alan and Sarah-Jane to run 350 breeding ewes and 70 replacement hill Cheviot ewe hoggs, alongside the cattle enterprise. “My father ran a flock of 1200 hill Cheviot ewes on the Kintradwell Estate in Sutherland, where I grew up, before moving on to Mid Gruinards, where my family and I ran our own flock of 600 hill Cheviot ewes,” began Sarah-Jane. “From a young age, I learnt how efficient and versatile the hill ewe was and when Alan mentioned he wanted to introduce sheep to the farm, I knew the Cheviot would suit the type of ground here. It was also an advantage that I was familiar with the breed and the breeders, having worked on so many different flocks during the lambing season.” 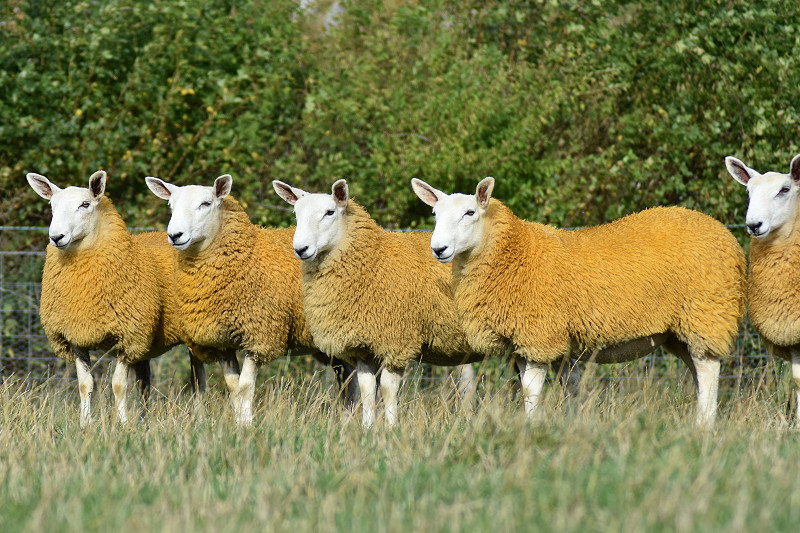 Before buying the Northies, Alan and Sarah-Jane decided to visit some local sales and find out what type of sheep sold well in the area. It became apparent to them fairly quickly that the Mule sold well in Morayshire and Aberdeenshire, and although the Scotch Mule demand seemed to be fulfilled easily, there weren’t many Cheviot Mules available at the time so they could definitely see a market. “The North Country Cheviot hill ewe is very efficient and she will happily produce and rear two lambs year on year at not a lot of cost,” said Sarah-Jane, pointing out that some of the flock ewes are eight-years-old and are still going strong. “Since breeding the Cheviot Mules, we’ve found this cross an extremely efficient female and one of the most cost-effective Mules to run. The females are still worth quite a bit at the end of their lives and we find we can sell the ewe lambs to any customer, whether they are on high or low ground farms and know they will do well.” Initially, the couple ran all the Northies with the Bluefaced Leicester to maximise cashflow and allow them to build up flock numbers, but since increasing the flock, they have been able to breed pure and cross. “In 2019, we ran 75 hill Cheviot ewes pure, with 220 ewes tupped to the traditional Bluefaced Leicester and the remainder to the Suffolk to produce Suffolk cross Cheviot ewes,” said Alan. “We didn’t want to put all our eggs in one basket with the one cross and have found that the Suffolk cross Cheviots also sell well through Huntly. The market has certainly grown for the Cheviot Mules and the standard of the ewe lambs has definitely got higher.” For the first three years, Alan and Sarah-Jane sourced broken mouth replacement ewes at both Lairg and Dingwall, and then in 2018, they were able to keep the first of their own home-bred replacements. “I was working full-time when we started with the flock so we needed ewes that knew the job and would get on with it at lambing time,” said Sarah-Jane. “We were also on a budget so broken mouth ewes were our only option if we wanted the right bloodlines. This year, we topped up our replacements with some ewe lambs from Dunbeath Estates but through time, we would like have enough females to breed all home-bred replacements.” 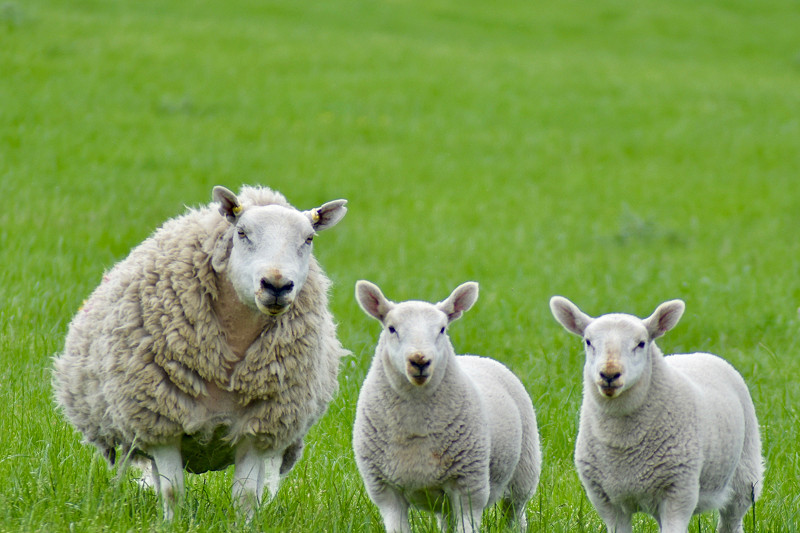 All ewes at Dalrachie are given a pre-tupping mineral dose prior to running with the tups and are also treated for fluke and worms at the start of October. Tups head out with the ewes around October 27 to allow for Alan and Sarah-Jane to get lambs on the ground by the third week in March. The ewes regularly scan over 170%, with the couple’s best scanning to date at 176%. “Ewes which are tupped to the Bluefaced Leicester go out to winter grazing where the weather and ground is a little kinder on the older ewes,” commented Sarah-Jane. “We always have the ewes scanned by the third or fourth week in January and its then that we take the twin and triplet bearing ewes home to avoid stress when travelling later in their pregnancy. “The flock is fed accordingly to the type of year, with twin and triplet bearing ewes introduced to Premium Ewe Rolls six weeks prior to lambing. Those carrying a single lamb come home three weeks before lambing and receive 300 grams per head.” All ewes receive their Heptovac vaccination three weeks prior to lambing and are wormed and dosed, with triplet ewes shed off and fed twice a day to maximise their intake. Home-grown silage is fed adlib and all ewes and lambs have mineral tubs all year round to ensure energy levels are correct. Huntly Mart has become Alan and Sarah-Jane’s main market for selling stock, with all breeding female lambs, cast ewes and prime lambs sold through the centre.

The majority of breeding ewe lambs are sold on the first Saturday in September, with some of the twin and triplet ewe lambs sold at the next sale on the second Thursday of the month. “Since we started, we have sold a total of 500 Cheviot Mule ewe lambs to average £114 per head, with our top price to date being £136 achieved in 2019,” said Sarah-Jane, pointing out that they have returned and new buyers, with one lot having sold to Northern Ireland last year. “Last year was our first year selling Suffolk cross Cheviot ewe lambs and they averaged £96, having sold to a top of £106.” All lambs are double vaccinated with Heptovac, wormed every six weeks and mineral dosed every three. Wedder lambs and ewe lambs not suitable for breeding are sold from mid-August onwards, with wedder lambs regularly averaging £80 per head. Admittedly, Alan and Sarah-Jane have always purchased stock tups on a budget, with an £1800 Kirkstead Bluefaced Leicester purchased at Kelso Ram Sales in 2018 being the dearest tup to date. “We don’t pay a fortune for tups because the figures have to add up at the end of the day,” commented Sarah-Jane. “The Kirkstead ram left us lambs with great size and quality and the two Slipperfield tups purchased in 2016, have left very stylish lambs. As a wedding gift, Alan and Sarah-Jane were extremely grateful to be given the pick of Joyce Campbell’s Armadale shearlings in 2017. They chose a tup which was bred out of a Fleurachy ewe and went back to a South Balkeith sire. He was later named Armadale Dirty Deeds and has bred long, feminine females with great skins, three of which won the breeding sheep championship at the Royal Northern Spring Show in 2019. “We ran Dirty Deeds with a cut of broken mouth Achentoul ewes which we purchased at Lairg,” said Sarah-Jane, adding that they will have four of his two-shear sons destined for Lairg later this year. “The corrects from the same Achentoul batch that year hold the record at Lairg of £175 so they are great ewes with tremendous bloodlines.” As well as being kept busy on the farm, Sarah-Jane also works as a bookkeeper at Knockando Woolmill, situated 12 miles from Dalrachie. In 2018, Knockando Woolmill used wool from the Dalrachie ewes to produce products, which has since led to Dalrachie North Country Cheviot throws being available to purchase from Pad Lifestyle in Harvey Nichols. It’s clear to see that the North Country Cheviot breed is ticking all the boxes for Alan and Sarah-Jane Forbes, allowing them to produce cost-effective females which can go on and do well on any type of farm. “Due to the North Country Cheviot’s versatility, we reckon the breed has a stable and bright future ahead and will continue to breed top-quality lambs for sheep producers,” concluded Sarah-Jane. 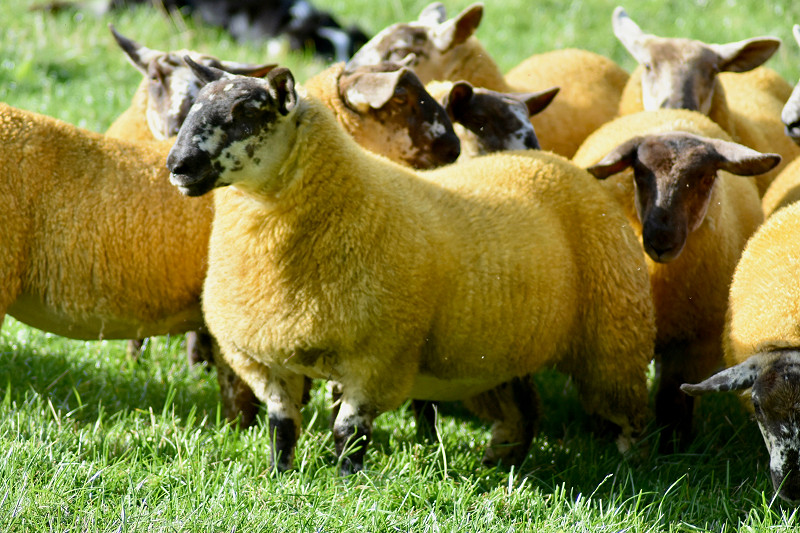