NCC's - They're a 'no brainer' at Attonburn

NCCs – they’re a ‘no brainer’ at Attonburn

There are few sheep breeds that can match the hardiness and versatility of the hill, or Lairg-type North Country Cheviot which, in recent years, has certainly proven its ability in both the sale and show rings, scooping inter-breed championships as well top prices for store lambs, breeding and cast sheep. With the Northie able to withstand and thrive in the poorest of conditions and still prove a good breeding ewe that can be bred pure or crossed to any other breed is the sole reason for their dominance at Mowhaugh and Attonburn, which is contract farmed by husband and-wife team, Robert and Becca Rennie, along with their son, Andrew

Based in the Bowmont Valley, near Kelso, Robert and Becca began their contract farming agreement four years ago with Roxburgh Estates following a move from Sydenham Farm, in Kelso, and they run 2200 hilltype Cheviots across 2800 acres of the estate.
Having only just recently moved into the breed, it seems that Robert and Becca have already begun a strong passion for the much-loved Northie. “The North Country Cheviot is a simple breed and I like them due to their maternal instincts and prolificacy. They produce plenty lambs that have a good carcass and can do any job – store or fat – at most times of the year,” explained Robert. “There is a huge demand for ewe lambs right now and we can sell the majority of our privately very easily,” added Becca.

Producing quality lambs starts with the tups, and Robert and Becca know exactly what they are looking for when it comes to selecting a sire. “We used to buy in quite a few stock tups but now that we are into our type, we are buying fewer each year and instead, making use of our own shearlings before selling them at a later stage,” said Robert. “We are continually looking to experiment with new bloodlines and when it comes to buying a new sire, we are looking for carcase and skin, first and foremost,” added Becca. 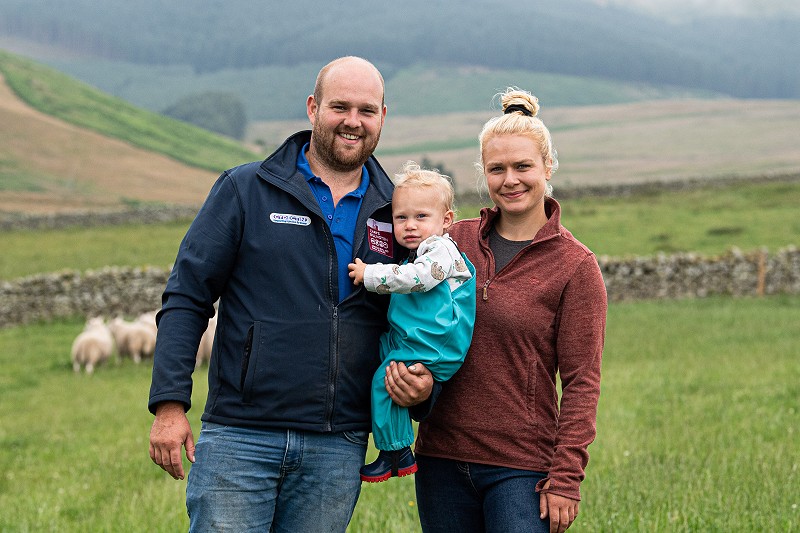 “Another thing we look for is crisp, white hair and they have to have a real cockiness about them – they have to catch the eye. You can’t go past a tup that holds its head up and has a bit of class. Also, good locomotion and feet are a must!” she continued. “One tup that made its mark in our flock was the £2100 Thistle Venture, purchased at Dingwall from Rosemary Cameron, with his first sons selling up to £4000 on two occasions last year,” Robert stated. With Attonburn tups annually sold through Lockerbie, Lairg, Dingwall and Oban, the couple have enjoyed a couple notable achievements including topping last year’s Lairg sale at £14,000 with Mowhaugh Xonerate and their run of 32 tups averaging £1819.

Tupping takes place in November and across the two farms, the flock scans in at 163% – with only 3% of ewes scanning yield – following through to weaning at a 152% average over the past four years. “We believe the low yield percentage has a lot to do with the tups. They are good at their job – we are putting 80 ewes to a single tup and they seem to be managing no problem,” said Robert.
On the run up to lambing, from January through to March, ewes are fed a ration of ad-lib silage at the bottom of hill, with the silage only being eaten by the sheep if they need it. “We run a relaxed system here and don’t push the ewes to eat – if they’re hungry then they’ll come down the hill but if not, they are left. We do make sure that the older and heavier ewes get what they need, however, the fitter ones are left alone,” said Becca.
One month before lambing kicks off, Robert and Becca bring all the twin and triplet-bearing ewes into enclosures, with the singles remaining out on the hill. Twins and triplet-bearing ewes are then moved onto a ration of 18% protein Ewelac rolls, with singles being brought into enclosures and fed the same two weeks before lambing, to aid milk production for twinning on triplet lambs. Lambing is the busiest time of the year for the Rennies, which requires the assistance of a capable team of part-time workers to come and help during the busiest spell.

All ewes are lambed indoors, so that any problems are easily spotted and as soon as lambs are full, they are moved out to the field. “We run a high input, high output system and we have a tremendous lambing team, who’s focus and hardworking ethic mirrors our own, which makes lambing run smoothly,” stated Becca. Before being moved outdoors, lamb’s navels are sprayed with iodine and treated with Provita Probiotic to prevent watery mouth spreading through the lambing shed. “We did use Spectam in the past but we have been trying to get away from it all together as we were having issues with it, with lamb’s falling ill to watery mouth even after being treated with Spectam,” commented Robert. “We were trying to reduce our antibiotic use and since the change to Provita Probiotic, we experienced no watery mouth until 75% of the way through lambing but was far easier treated.” Once ewes are released back onto the hill with their lambs, they receive no feeding when rearing and are left to thrive on grass.
Weaning takes place in the middle of August and lambs are sold store, weighing between 25-30kg having been taken straight off their mothers and only reared on grass, with the entire crop being sold by mid-September – allowing grazing to recover for the ewes in preparation for tupping.

Last year, the couple averaged £66 for their store lambs, with 750 ewe lambs selling privately to cash in at £88. “One of the great things about the breed is that you can sell a Cheviot lamb at any time of the year, and we like to sell them quick,” Robert stated. With Robert and Becca retaining a large draw of 600 ewe lambs for breeding each year, the pair also cull hard with a two-strike system in place for problematic ewes. “If ewes are lame more than once, then they are gone and prolapsing once also means they have to go. If we have a problematic ewe that leaves her lambs, she is also marked to head to the cull ring – I don’t want to be looking after sheep that can’t look after themselves or their lambs,” he said. Robert and Becca also own a flock of unregistered pure Texels, with their tup lambs being crossed with the bottom end of 300 Cheviots to produce good fleshy lambs that can be sold both for breeding and for the store ring, before the tups are sold as shearlings the following year.

Having produced 270 store lambs last year, the couple averaged £75 for the entire lot, with their ewe lambs selling privately for £100 per head. The Cheviot cross Texel ewe doesn’t only just look the part, but also boasts the Cheviot prolificacy traits, with 96 gimmers scanning in at a 201% average last year. “We decided to keep 100 of the cross ewe lambs last year and tupped them with the Beltex this year, just to see how they were doing for our customers,” explained Robert. “The lambs are very shapey and will sell good in store ring next month, so we will continue to do this as it allows us to produce a stronger in-bye ewe that produces a more saleable lamb when crossed with the Beltex.”

Outwith the Attonburn sheep unit, Becca and her father-in-law, Andrew, also own 30 Limousin and British Blue cross cattle that produce great show potential calves and, if that didn’t keep the paid busy, they also buy in 50 Luing, SimLuing and Blue-grey heifers each year to manage the lowland grass, before being bulled and sold on again. The pair are also focussing on expanding their own flock of 400 Romney ewes, which are crossed with Hampshire and Vendéen tups to produce fast maturing fat lambs. The flock is also helped managed by Robert’s father, Andrew. 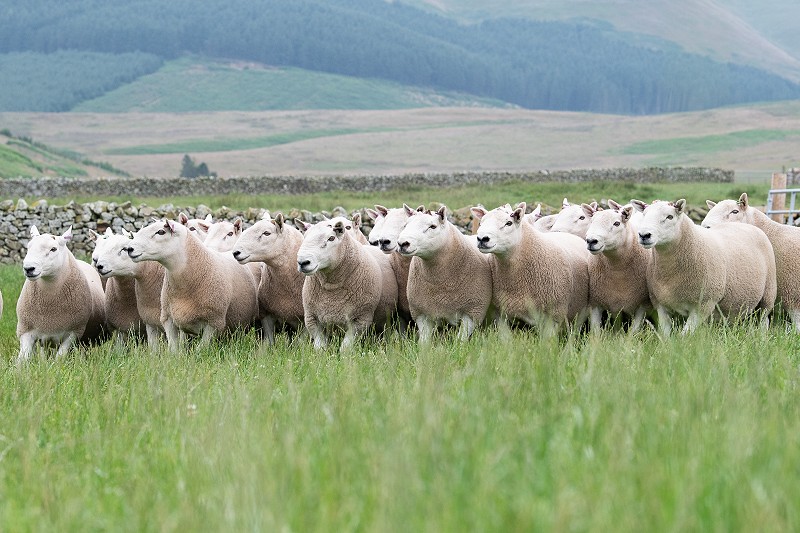 Following their move to Attonburn, the pair have also reflected on the individuals who have helped them in their journey to success within the breed. “Good sales and top prices do not come without a lot of hard work, dedication and attention to detail, but thy rely too upon our skills and knowledge taught and passed to us by very appreciated influences in our farming lives,” commented Becca. “ Charles Symons – who farmed at Attonburn for many years before retiring and gave us the opportunity to take over the reins – always taught us to buy the best tups but, most importantly, the kind of tups we need for each specific heft. “He also taught us how to market our stock and make the most of each animal, leaving nothing to chance,” she said. “Our close friend, George Blacklock – ex shepherd who was born and raised at Attonburn – along with father and son duo, Charlie and Stuart Oliver, also taught us everything we know about dressing and presenting sheep for shows and sales, as well as bringing them out and making sure the sheep truly look their very best,” added Robert. 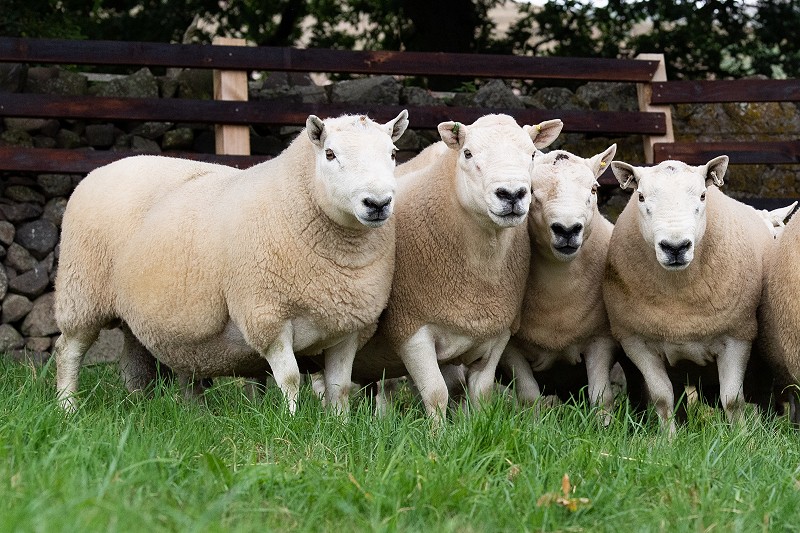 Focussing on the future of the breed, Robert and Becca are confident that the North Country Cheviot can only flourish among the competition. “The Northie is the most versatile sheep, whether they are kept in lowland or hill ground and they can be either bred pure or crossed with the Texel or Suffolk that produces a quality fat lamb that can do any job,” explained Becca. “They can run on any poor ground and still produce that end product. There is a huge market for Cheviot Mules, which is taking the breed from strength to strength and putting a huge price on our draft ewes – which we can only be thankful for”. “Looking towards a postBrexit market … as long as we keep producing quality then quality will always sell. The British market is looking for sustainably produced food and we have to have this – we can’t compete with Australian prices but the story of the lamb has to be told and there’s a huge welfare difference different between us and Australia, for example,” Robert commented. “We have to work on getting that message across to the public and give them the fundamental reasons on why they should support British produce and it’s farmers.” Robert and Becca will have 23 Texel shearlings heading to Kelso and 31 Cheviot tups for society sales later in the year.

Thanks to the Scottish Farmer for the use of this article & photos.