Next generation sees the benefits of North Country Cheviots 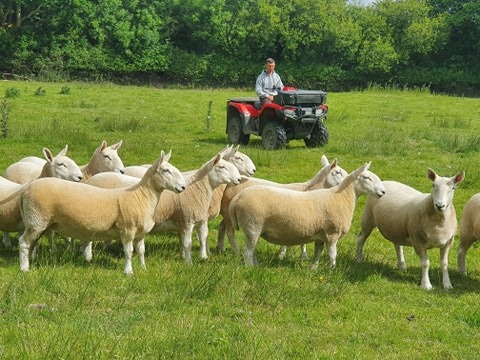 THE North Country Cheviot ticks more than just one box for Sam Pedrick at Brimley Farm, Bovey Tracey, in Devon. In fact, the breed is a no brainer as far as he is concerned. And the returns he achieves from his 170-strong ewe flock speak for themselves. “For me, the Cheviot is very easy on the eye. And if you are looking at a flock of sheep every day you have got to like what you see: Whatever the weather they always look the business,” says Sam. “The breed is hardier so easier to keep than some others – as far as sheep go. All parts of the enterprise are marketable: Female trade is very strong at the moment and the wether lambs are also worth something.”

Sam’s great interest, however, is in the breeding ewe. And after 15 years he is now seeing the results of a breeding programme which has resulted in a flock which is bringing home the spoils both in the county show ring and at national sales.

His grandfather Maurice had, for many years, kept Cheviots crossed with Scotch Black Face and Suffolks at Brimley. As a teenager Sam developed an interest in the breed and, when 14 years old, went to Tavistock market and bought his first pedigree North County Cheviot ram.

In 2011 he crossed the Scottish Border for the first time and bought a ram from both Allanshaws and Stobshiels at Kelso. Since then he hasn’t looked back and is a regular at Lockerbie, Kelso and Builth. Last year he purchased Allanshaws XXXX which was picked out for characteristics very true to type in the hope the ram will keep the flock uniform.

“He might not be as strong as some I bought before – especially a Philiphaugh ram. The Gospelhall sheep I bought at Lockerbie in 2015 has probably had the most influence on the flock,” says Sam.

“There is no doubt it takes at least 10 years to establish a flock as you want it. I wouldn’t say I was there yet but the ewes are definitely better than they were - there is much more quality throughout them.

“I really enjoy the breeding side of sheep. It’s nice to have something to build on every year and then sell breeding stock. In the fat lamb trade once they’re gone that’s it; there’s only one place they are destined.”

This side of the enterprise has also held its own. Last year lambs averaged £88.50. These would have levelled at 45kg lw and were mostly sold through Exeter market. Any hog rams which were not going to make the grade as breeding rams were marketed the same way and achieved £100. And, like most, Sam cashed in on the strong cull ewe trade at the beginning of March to average £91/head with the best reaching £124.

This is not a hill farm but the 36ha (90-acres) are all old pasture so no clover-rich leys. Sam’s biggest expense is 6t of nuts at lambing time for doubles and trebles. “I run a very low input system. Lambs are finished off grass alone.”

This year the flock scanned at 170%. Most years the figure would fluctuate 5% either side of this mark. “Like many others we had a lot of trebles this year (19) and 17 empties. With that trade as it was I was out looking for them – which is unheard of usually,” said Sam.

Ewes lamb outdoors from late March. “This might just be the only time of year I wonder why I keep Cheviots: they aren’t the easiest to catch if they need help lambing outside!” admits Sam who houses the trebles.

Thereafter ewes and lambs are rotated around the farm onto fresh pasture. Doubles have the best of keep but are shut out of mowing grass on May 1st.

A month later ewes are shorn. “We are lucky Cheviot wool is such a high quality and therefore pays better than other breeds but wool still deserves more recognition being a sustainable natural fibre. More should be made of this; the industry should be out there promoting it better,” believes Sam who is busy shearing for other producers throughout the season.

Grass is cut in June so there is plenty of aftermath for lambs when weaned in July. At this time they also receive a mineral drench. Most years there is a pick of lambs ready to go straight to Exeter then.

Sam has become a firm believer in worm egg counts. Stock is then treated accordingly, rather than on a regular basis. “One year the lambs had terrible scour and the test revealed there was a problem with coccidiosis. That showed me testing can be very handy,” explains Sam.

Lambs are shorn in August – except any near to finishing. “I then turn them away for six weeks and forget about them. One of the benefits of a Cheviot is that it will never get too fat but keep growing so you can take a finished lamb to heavier weights,” says Sam.

At this point he will pick out the best 20 tup lambs. These move to the better keep, are fed from October with the best 10 retained the following March. 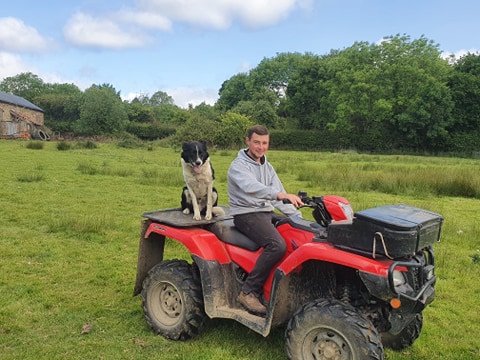 “It’s a lottery at lambing as to which ram lambs should be castrated. In August I’m usually sick as a dog picking out the best tup lambs because some of the wethers are always better than some that didn’t get ringed at lambing,” admits Sam.

A majority of the shearling rams are sold privately off the farm. In the past two years the best have gone to the NSA Wales and Border ram sale in September. Last year he averaged 400gns for half a dozen and was delighted with his trade.

He also entered the society sale at Monmouth at the end of August. Here he achieved 450gns for a gimmer by Nun Cote Nook Tell Tale.

This ewe was judged Interbreed Champion at Chagford Show a few weeks earlier – an achievement which, for Sam, surpassed reserve breed champion with his old ram Broomhillbank Viper at Devon County and the same title awarded to a shearling ram by Gospelhall Spot at Royal Cornwall Show. 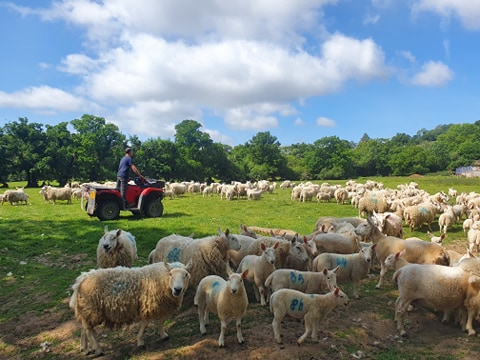 “In the show ring a good North Country Cheviot will always hold its own in an interbreed: There is nowhere to hide any faults in conformation and they are such ‘showy’ sheep. Their presence catches the attention of any open-minded good judge,” says Sam.

In fact, Sam believes the breed is increasing in popularity across all sectors of the sheep industry. “In the past few years many people – especially those around my age who also go out to work – have seen the light about the Cheviot,” says 29-year old Sam. “They like the idea of a good quality sheep which has come off lower quality ground going on and doing on their farm. And the ewes last; it’s quite normal for a six- or seven-crop ewe still be holding her own in a flock.”

As a result, Sam keeps back 99 ewe lambs each year. Of those about half go to ram as gimmers and the rest are sold pre-tupping. Last year they achieved £145/head. And 20 older ewes averaged £80 each.

Despite a continued demand for his stock – both commercially and from other breeders – Sam is strongly considering cutting back his flock. “I am getting more and more particular as to the type of ewe I want to keep. It’s a case of less is more,” he explains. “There’s also a likelihood we are in for a second dry summer in three years.”

And it is looking like this year will be the first since 2011 when he does not need to buy in fresh blood as he is very happy with the way all five of his stock rams are breeding.

As nearly every breeder has uttered this spring, Sam has some cracking stock he is bitterly disappointed will not be out on the showing circuit. You can be sure, however, nothing will be left to chance to ensure he is at the top of the line in 2021.